Cars are a part of your everyday life. Even though you can't drive yet, they still affect you. The food in your cupboards, clothes on your back, and the furniture you sit on were all delivered by vehicles to stores and then to your home. The invention of the car changed how people will live forever. Most people get in a car, turn the key and don't even wonder what gets the engine running and the tires spinning. The brakes, windshield, engine, wheels and battery all make a car go and get you safely where you need to be.

Brakes are what keep a car from going out of control and without them, there is no way you could drive or ride in a car safely. Over the years, car brakes have come a long way from what they were 100 or so years ago. Imagine riding your bike and needing to stop. You pull down on a lever, using your hand, and this lever causes two pads to press against the bike tire creating friction. This friction is what slows your bike down. Car brakes work very similarly. When the driver presses down on the brake with his foot it sends brake fluid through tubes towards the brake pads to squeeze the tire and stop is from rotating. Think of a doctor's syringe filled with liquid. When the doctor pushes on the top of the syringe the water is forced through the needle. It cannot be compressed and can be very powerful. Brake fluid is also powerful and the harder and faster the driver presses on the brake pedal, the faster and harder the car will stop. 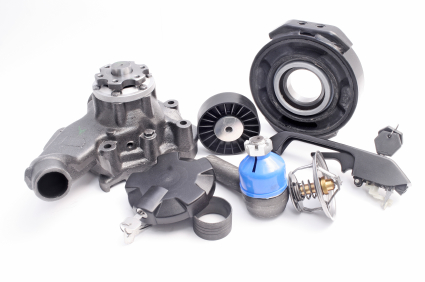 Engines are amazing! With the simple turn of the key and a small spark, the car comes to life. The engine has several parts to it, but the pistons are one of the most important parts. These pistons go up and down the moment the car is turned on and gas is released into the cylinder. As one piston goes up, another goes down and this continual up-and-down process rotates the crankshaft and keeps the car running.

Wheels were invented long before vehicles and even before bikes. Workers started using them on carts like a wheelbarrow to make it a lot easier to move heavier things. Think about a large pile of rocks that you have to move from one room to another. Now to speed up the process you fill a large box with the rocks and push the box to other room. The box slides but the constant rubbing on the ground, called friction, makes it hard to get there. What if you placed this box on a large toy truck? The wheels still rub against the ground but only at a small point compared to the bottom of the box. With tires below the box, it will go faster and easier and require less work from you. Wheels on a car serve the same purpose. They rotate together to get the car rolling and continually moving.

The battery is what gets the engine started. A small spark ignites the engine and gets those pistons spinning, but where does this spark come from? The spark plug creates this spark and the battery has the important job of giving the spark plug the power to do this. Once the car is running the battery is no longer used while driving but the battery is the only way the car can get started. , but batteries need to be charged. When playing with a flashlight, you turn the light on and off. Every time it turns on the battery produces electricity and drains the battery of energy. The same thing happens to the car battery. Every time the car is turned on, it produces electricity and loses power. While the car is running, it produces energy to the alternator and the alternator charges the battery. This is why it takes car batteries so long to die. Without the alternator, they wouldn't last more than a few short drives.

The windshield was invented to protect the drivers inside as a car speeds off down the road. They are designed with a thick glass that is difficult to break even when small rocks hit it. It also keeps the wind off of the drivers face so they can see while they are driving. With how fast cars go today, it would be almost impossible to navigate a car without it.